All you need is... water

„4 Elements and The Alien Invasion”

The facilitator describes to the group the movements for each of the following:

*WATER – everybody has to jump on the chair

*FIRE – everybody has to touch the wall

*AIR – everybody has to pretend they are a flying airplane

*EARTH – everybody has to lay on the floor

*ALIEN INVASION – everybody has to find and hug another person

The facilitator tells an imaginary story of their imagination (might be related a topic of the workshop) using „key words” on which the group must react (example ->).

Hints for the facilitator:

– What do you think, what the story was about?

– Is the water important in our life? Why?

– What would happen to the planet if water disappears?

– What would happen to the people/the human body if they stop drinking water?

For example: Once upon time, on the planet EARTH (reaction), there was a group of young people who were scared of a possible ALIEN INVASION. ALIEN INVASION was of great concern in their lives. They were not afraid of FIRE, nor of an EARTHquake, nor of AIR pollution or the WATER deficiency. Aliens were the scariest thing that could happen to them. One day something weird started to happen. All WATER began to disappear. First the WATER disappeared from their showers, taps and toilets. Then all the rivers and streams were emptied of WATER. People didn’t know what to do, so they started to call the FIRE brigades for help – the FIREmen tried to dig deep into the ground, looking for a source, but no WATER appear. Then they called to the all AIRports on EARTH askingg all pilots, engineers and all kinds of workers to move clouds for the WATER to appear as the rain. But all these efforts didn’t work either. WATER dissapeared. People forgot their fear of an ALIEN INVATION, they were scared there will be no more WATER, ever again. Then one man, named AIRthur FIRE – EARTH, had an idea, to start praying to mother EARTH to give WATER again. Everybody gathered in a large field where AIR was fresh and cold and they started dancing and singing the following song:

Then, suddenly a large spaceship appeared on the sky and landed on EARTH. The door opened and a group of weird green-looking creatures came out…an ALIEN INVASION has started! An ALIEN INVASION that everybody was afraid of! So, it was real! But surprisingly, Aliens were friendly and instead of invading and hurting people, they brought WATER. They filled up showers and taps with WATER. Rivers, oceans, seas and streams were full of WATER again. They even brought plenty amount of bottled WATER. Everybody was so happy, they made a party with a big bonFIRE, for which they invited AIRport workers and FIRE brigades and WATER patrols, so everybody celebrated the „Day, when WATER appeared again”. Nobody, ever again was afraid of An ALIEN INVASION, instead the whole community realized the importance of the WATER.

After having a brief discussion regarding water, it’s usage and importance (look at the questions above), the facilitator distributes the appendix (form) to be filled up by the participants.

Here facilitator attracts the group to the topic of absorbing water by the humans and proceeds to the next task.

Hints for the facilitator: 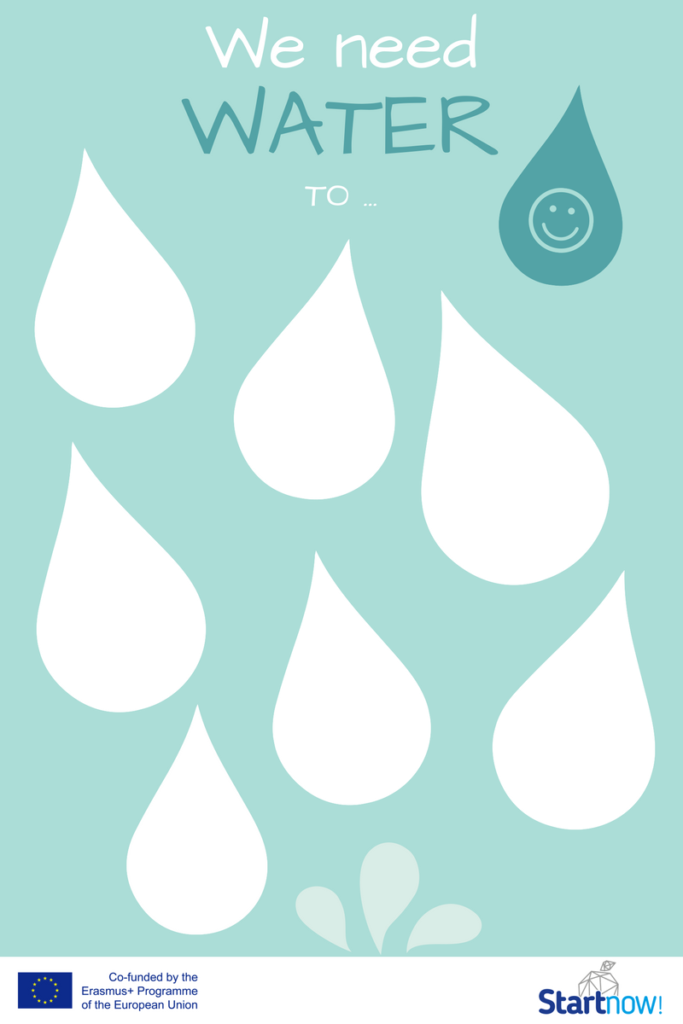 The facilitator introduces the task by saying that we not only drink water in a liquid form but the reality is that we EAT it as well. Next, the facilitator divides the group into smaller groups (in one group should be no more than 4 persons) and asks the groups to estimate the percentage of water in well-known vegetables and fruits, such as:

Once the task is done, each group is asked to present their results – the group with results closer to reality should be awarded by the facilitator. And as a summary of this task the facilitator presents, the topic “How much water do we eat?” in a form of a large poster or hand-outs to every participant (maybe as bookmarks) or a brochure (photo 2) and a brief discussion follows. The following questions might be included which will lead to the next activity: 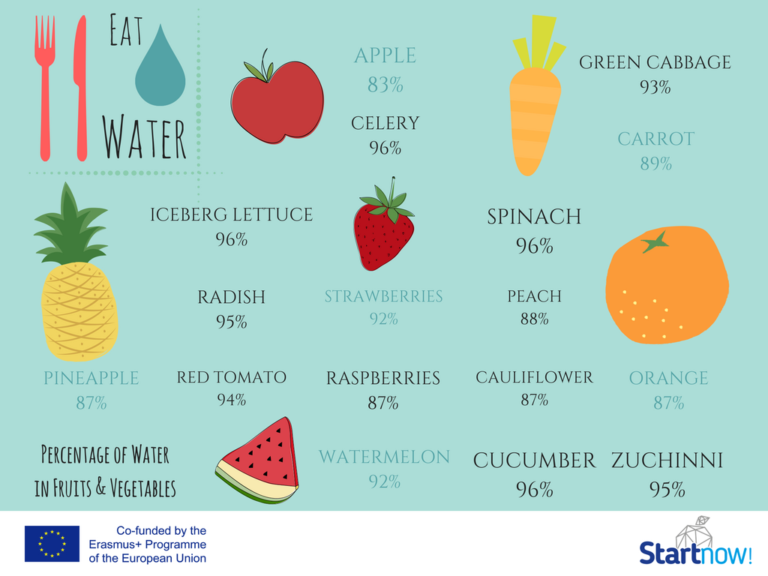 3. „What would happen if you didn’t drink water?”

As a summary of the lesson watch a TED – ed short video „What would happen if you didn’t drink water?”

https://www.youtube.com/watch?v=9iMGFqMmUFs – film is available with subtitles in many languages

What is the conclusion then? (ex. DRINK WATER=STAY HEALTHY)

At the end, the facilitator can ask groups to come up with a CREATIVE slogan/motto which will encourage people to drink water instead of other drinks (especially those which contain a lot of sugar). Students should write down their slogans/motto in a creative way (as a poster), take a picture and post on the social media-as a project promotion. Later the slogans can be hanged out in a classroom.

Upon conclusion of all the activities the facilitator asks each participant to share in 1 sentence what they have learnt during the workshop (knowledge) and present few smartphone applications which help staying hydrated („Plant Nanny – Water reminder with cute plants”, „Daily Water Free – Water reminder and counter”, „Waterbalance: best way to control level of water in your body”) and encourage students to take a challenge of drinking around 8 glasses of water for the next two weeks.

This activity can be performed at home individually or in groups during the workshops.

The facilitator prepares the ingredients and asks students (individually) to prepare a „healthy drink” of their own choice (as an alternative to the sweet drinks) – students should write down the recipe and come up with a name for it, then they should actually prepare the drink nicely and drink it together. It would be interesting to take pictures of the healthy drinks and their authors and share the photos on social media as a promotion of Health Education and the project. The recipes can be printed out and publish as a small book.

This activity can be performed at home individually or in groups during the workshops.

The facilitator asks smaller groups to create a promotional poster/leaflet of positive outcomes of drinking water. The groups should prepare it in a nice, graphic way, including all the necessary information. The posters later can be hanged on the classroom walls (making a gallery/exhibition) or posted on the Internet (if designed in a computer program).

This work is licensed under a Creative Commons Attribution-NonCommercial-ShareAlike 4.0 International License.